Today marks 6 YEARS that we have been logged in for Pumpkin. I don't know that there is anything more to say about that.
Written By M and M at 5:48 a.m. 8 comments:

Just realized that other than yesterday, I hadn't updated this blog since May 2011. I am sure that most of the people that read this blog have given up on me.

Let me see what has happened.

We sold our house

We bought a new house in a new town and we LOVE IT! The house is great, the street is a quiet little crescent.

The drive to work is a little longer for me, but the house is worth it. So far this winter we have been lucky with the weather so it hasn't been an issue.

We have a garage in the new house - let me tell you I certainly appreciate it in the winter! We park both of our cars in there.

It has been 6 years since we started on our journey to adopt.

We have been logged in for just over 5 years.

Still after 5 years, there is no end in sight.

We are happy in our lives.

We have a great family and wonderful friends that really are family that complete out lives. 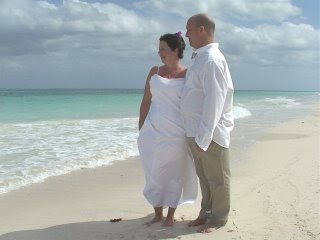 We were married on a beach in Cuba and it was perfect. Today we celebrate our 8th anniversary. I can't believe how quickly the past 8 years have flown by.

HAPPY ANNIVERSARY H!! You have made me one LUCKY and HAPPY woman!!

I don't know if anyone even reads this blog anymore.
Written By M and M at 6:05 a.m. 9 comments:
Labels: Anniversary

Update to the Neighbours **UPDATED**

After I had written the last post about our new neighbours - some things happened.

That evening, the neighbour (whom I know)from the other side of the new people's unit came to my house to talk about the noise and to decide what to do.

In the last post when I mentioned on Tuesday night about the car door locking at 11:00pm and the smoke in our room at 3:30am - apparently at 1:00am there was some drum playing that woke up the neighbour on the other side. I did not hear that.

The dog was standing in the window barking as we were talking. Looks like a pit bull to me - or something similar.

He and I talked and he decided he was going to call the condo corporation and the property manager would then speak to the owner of the house - the people living there are tenants.

Today in my mailbox I received a hand written letter. It really smells of smoke - that was my first impression. It reads as follows:

To our new neighbours,

It was brought to my attention from my landlord that there has been noise complaints caused by our dog since our arrival.

My landlord told me that it is either us or the dog.

This is new behaviour for our dog and I'd like (with your permission) to try to solve this problem before I have to put him down.

Please give me the chance to either find him a new loving home or fix the problem.

Please call me if you are willing to talk about this problem.

I look forward to hearing from you.

Again I am sorry for the noise.


WOW! I was surprised by the letter and impressed with their initiative. I didn't make any calls to complain, but from this I would assume the neighbour on the other side did. I will be talking the him first to see if he got a similar note before I respond to her.

I must say that yesterday and today I haven't heard anything from their unit. I don't know if that is because someone is home and the dog doesn't bark when his owners are home or if he was just doing all the barking and the whining because of his new locations.

I will update when something happens.

I will have to catch my other neighbour and figure out our next step.

***UPDATE*** The reason I have not heard anything from their unit was because when her landlord called her, she sent her dog to a friends. The other neighbour did talk to her and things are good. Never for one minute did anyone suggest putting the dog down. She is new in the neighbourhood and nipping things in the bud is the best way to handle this. She has never lived in a townhouse before and didn't know that noise could travel. Us and the the neighbour on the other side have both lived here for a long time and never heard any noise from the unit between us. Apparently the dog and woman came from a large house full of people and the dog is lonely now living and spending most of his time alone. The neighbour also informed me that the dog is a pitbull/lab cross. I still don't know who the woman is, I still have not seen her but I will talk to her over the weekend either in person or on the phone.
Written By M and M at 7:29 p.m. 6 comments:

UGH! They only moved in on Sunday and already I have had enough of them! I have never even seen them!

Sunday afternoon a truck pulled up and they unloading began. To say that I hadn’t seen them might be wrong. There were six guys unloading the truck so one of them might be living there.

I went out and when I returned they were still unloading and that is when I saw them unloading a drum set, guitar and amp…sigh. Later that evening we were getting ready for bed and they were in their backyard clanging beer bottles. There were lots of beer bottles and lots of clanging. As I crawled into bed, I had to get up and close the window as I didn’t know how much longer that was going to go on for.

On Monday when I got home from work, their car was not there but I found out that apparently they have a dog. I know this because the dog barked continually for 2 ½ hours until they came home. By continually, I mean continually. After the owners came home, again I didn’t see them, but their car was there, and the barking stopped.

Tuesday I came home to a whining dog. Non stop whining dog. The dog continued to whine all evening and into the night. At 10:00 when I went to bed, the dog was still whining. I couldn’t relax. I had trouble falling asleep. The poor dog had been there all night whining and nobody had been there for it.

The owners did arrive home about 11:00. How do I know this if I was sleeping?? Well they felt the need to ensure their car was locked by pressing the ‘lock’ button multiple times so that with each press came a piercing beep.

There were at least two people in the car because they were loudly talking and laughing as they walked from the car to the house.

Finally I fell back to sleep – no easy feat for me.

At 3:30am, my nose was assaulted by the strong smell of smoke. They were outside their unit smoking and the smoke was coming directly into our room. Out of bed to close the window – none to quietly!

Again trouble getting back to sleep.

Wednesday, for the first time ever, I donated blood!!

Let me back up and explain why it too so long for me to do it.

When I was a child, I had hepatitis. I was sick and I honestly don't even remember having it as I was that ill. If someone hadn't told me that I had had it, I wouldn't even know.

As far as I understood, I was sick enough for my brain to block it all out. To this day I don't remember the 'bad' parts. I do remember when I was on the mend and I was allowed to go outside for the first time in FOREVER. I went over to the neighbours house and she and another neighbour friend were making a snowman. I went over to play and join them.

They yelled that I had cooties and ran away and wouldn't play with me. It was traumatic. THAT is my memory of having hepatitis.

I was always led to believe that I couldn't donate blood. I never really investigated it. A few years ago I made a call to Canadian B1ood Services and asked a few questions and they said that no I couldn't donate. However, if I wanted to go through a battery of test and documents and paperwork then they would investigate it for me. I left it at that.

However, on Wednesday our work had it's quarterly blood donor drive and I went up to talk to a nurse. She pulled out this HUGE book and looked through it and informed me that if I had had hepatitis before I was 11 then I eligible to donate!

I filled out all the paperwork required and took the plunge! Really how can you not when you can do it during you work day and all I had to do was walk up a flight of stairs!

I felt so good and lucky that I was healthy enough to donate to someone who was in need.

What a great day! I even got a sticker, cookies and juice!! 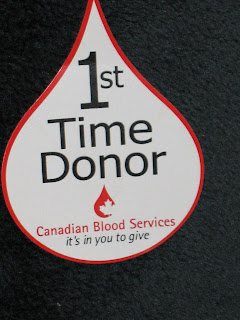 Well I did it. I knew I should not have done it, but I did.

Today we have been waiting for 52 months for Pumpkin.